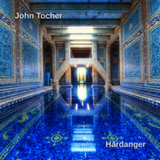 This work is dedicated to the memory of ambient artist Lucette Bourdin.

"The track title 'Hardanger' comes from hardanger fiddle music I ran across. I was listening to a rip I had of Alien Air Music, and just at the end of the previous show they had an off-beat classical music spotlight where they played this hardanger fiddle track done with troll tuning. Quite haunting. I was so taken with the track I edited it out and made a stand alone track of it -- I have since bought the cd. I forget which track it is, but I remember the DJ was saying the composer was living in some godforsaken place, dying of syphilis.

I got a chance to chat with Lucette Bourdin -- I sent her the hardanger fiddle track, and we both listened and discussed how beautiful it was. It was shortly after this I found out she was dying. In fact I never got to talk to her again. Not one-on-one anyway.

I don't know much about her in fact. I know she started making music seriously after being diagnosed with cancer. This thing (I am writing) is not so much about her as it is about her bringing the awareness to me (again) that we are all dying. Some of us have more time than others of course, but everyone's time is more limited than they realize. That is a gift from her, I think.

The track itself was somewhat accidental. I had stretched it and just hit it right the first time. I tried shorter and longer but neither sounded as good. I think it might be some of Eno's idea about recordings. Once you can hear something again it takes on a life of its own. Once I heard it stretched that first time it seemed as if it could be no other way. I don't think that is correct though, I think I just got lucky. Or it's corny to say, but there might be some other reason-- intuition, act of god, etc. It’s like a sculpture. It is there in the rock and it emerges. There was some polishing to be done, but I did not change the amount of stretching. I tried some further processing, but everything I did in this direction seemed to take it away from some essence that was there.